Week 388 of #ThursThreads had many fantastic tales. I’m honored to see all the writers come to tie a tale as we start our eighth year. If you’ve been doing it a while, thank you. If you’ve just found us, welcome! May you come back again and write more great flash. Thousand thanks to Katheryn J. Avila for judging this week. Check out the #ThursThreads #flashfiction group on Facebook or the #ThursThreads Group on MeWe to keep up with news, etc.

Katheryn says: I really like the imagery here. It’s a very brief piece that reads very fast but conjures a vivid picture.

Katheryn says: It feels like there’s a bigger story here, and I’d love to know what it is. Where did she come from? Who is the mysterious ‘they’ that’ll come for her?

Katheryn says: The urgency and stakes really come through in the short piece, and makes me want to know what happened before this and what happens next. And though it’s a small piece of a larger story, it gives us great insight into the main character and a clear idea of who she is and where she comes from. 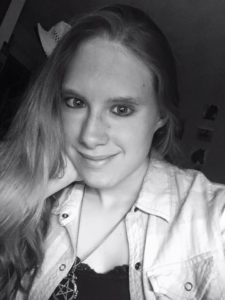 Katheryn says: I really enjoyed the portrayal of Hades in this one. He’s so often gloomy or grumpy, but here he seems like a pretty chill guy, the relaxed friend. I really like the relationship here and definitely need to know more about the mythos of the larger story. It’s always interesting to me when various different mythologies get mixed into a single story.

His one, and maybe only, good friend laughed. “I have to agree. I would take pleasure in sicking Cerberus upon some. Not even to hurt or maim, just for him to lick them to death with three eager heads. Imagine how many goddesses would be appalled to have their wear slobbered and their hair disheveled.”

Hades’ howl of laughter bounced off the cavern walls. Contagious. Death soon joined in, though nowhere near as boisterous. Every time Hades seemed to calm he’d let another bellow rip until he finally sighed and wiped at his eyes.

“That would be a sight worth seeing. She would hate me for eternity.”

“Doubtful. Aphrodite has always been smitten of you and jealous of Persephone. She couldn’t hate you if she tried.”

“Hmm.” Hades steepled his fingers beneath his chin. “You make a fine point. You are coming to the gathering, are you not?”

A sigh slipped from Death, sinking into the chair. “I would prefer not. I am the only god who doesn’t belong anywhere.”

“Nonsense. You are a god, therefore you belong.”

“Need I remind you I am still the outcast god?”

Hades waved a dismissive hand. “Come anyways. Take company with Persephone and I. Avoid Lucifer.” They both made a grunting sound of approval. “At worst case if you need space, escape to the Ether for a short time.”

“Be harder for them to find you.”

Congratulations Six Time Winner Daelyn, and Honorable Mentions Bill, Terry, and Silver! Don’t forget to claim your badges and display them with pride. You certainly earned it!