Social change is normal for a senator’s daughter, but affecting gender politics in centaurs wasn’t on Bethany’s agenda.

All Bethany Stanton needed was time away to think. She never imagined a walk with her horse might lead her so far from home. When she steps through a rift between worlds at an old archaeological site, she realizes she has bigger problems than marriage to the man of her nightmares. Like a herd of centaurs with distressing views on gender equality and “mythical” humans.

As part of the Supernatural Anomalies Investigative Field Unit, Major Stephen “Mack” McMacken has seen and done more weird stuff than written in a science fiction novel. When called in to track down a U.S. Senator’s missing daughter, Mack figures it’s more a case of runaway rich girl than supernatural mystery. Until his team finds the portal and he’s nearly torched by a dying phoenix.

In a world ruled by mythical beasts, Mack and Bethany find themselves on trial for endangering the centaur village. With the only escape route they know gone, working together to establish their innocence might prove easier than avoiding seductive Sirens and ravenous native beasts. 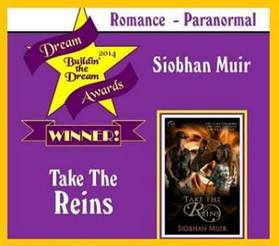 Write on Wendy Review: Take the Reins by Siobhan Muir

Bethany had never run from anything in her life. Not that she’d get far. A sitting senator’s prize daughter didn’t just disappear. He’d have the Alphabet Agencies after her faster than anyone could spell FBI. I guess it helps that he’s on several of those secret government committees.

Bethany stopped in the center of the site on a slightly raised hexagonal stone and dropped her gaze to her feet, trying to find a way out. I’m too young to get married. She grimaced at the memory of her grandmother telling her no good girl waited until she’d become a spinster. Thirty isn’t spinsterhood. Besides, her father’s choices of men tended to be those who’d benefit him, not her. Hell, I don’t even get the chance to love anyone before I’m tied down.

The stone beneath her feet glowed softly in the fading evening light and Bethany frowned, crouching to get a better look. Swirls of sparkles, like faerie dust, puffed out of the central stone, filling the air with flashing illumination. Bethany jerked her head up as the glittering light coalesced and flowed along grooved lines on the floor from each corner of the dig, engulfing her in its radiance.

The wind kicked up, whirling the brilliance around her like a cyclone. Bethany dropped to her butt and threw her hands over her eyes, ducking her head. The rush of air stole her breath and dried her throat, rising to a screaming pitch. A whinny hit her ears and she remembered Killian tied outside the circle.

Oh, God, Killian! She tried to open her eyes and crawl for the edge of the site, but the air currents buffeted her, holding her in the center. Dust and glitter clogged her nose and she coughed around the scents of horse, fresh cut grass, and…Honeysuckle?

Blowing dirt whirled in a choking dance just beyond her toes and she hunkered down, coughing harder. She hoped Killian survived the strange dust storm as she covered her nose and mouth with the tails of her shirt. The wind howled around her, flinging stinging particles against her skin.

Bethany ducked her head as she rubbed the sight back into her bedazzled eyes. Wracking coughs rattled her chest from all the swirling debris in the air. Voices, some chanting, some—whinnying?—rose in a crescendo and her hacking added a treble beat to the cacophony.

Then something popped and the wind died down. Bethany’s coughs slowed and she prayed she’d be able to breathe clean air soon. Her eyes watered with all the dust, but she raised her head and scrubbed her face, hoping to clear her vision.

The archaeological site sparkled around her like the dying remnants of a fireworks display. Through the foggy air and flickering lights, she caught movement. Several large bodies shifted fluidly, as if she’d encountered an entire herd of wild horses. The chanting had changed into shouts of surprise and anger.

Squinting against the dust, she searched for a place to hide. Where had all the horses come from? Had her father actually sent the cavalry after her? To hell with that. Bethany crawled toward the maple where she’d left Killian, hoping the dirt and dust would obscure her identity. If she could get to her horse, she’d blend in with the others and no one would notice her riding away.

Protecting her eyes from flying debris, she scanned the sky looking for the spreading branches of the maple above the cloudy air. She scrambled the last few feet, searching for the only horse legs not moving. She’d almost reached the edge of the site when a pair of striped hooves stopped in front of her.

Bethany froze and looked up, way, way up, into the scowling face of a fierce man. Wait, how’d she miss the horse’s head? The butt of a spear hit the ground before her hands and she jerked back, falling to her ass again. So much for being a lady. Her mother would’ve been appalled.

The dust cleared a little more and she got a good look at the man mounted before her. Except he wasn’t mounted. The horse’s shoulders and chest sprouted from where his human legs should be, and the spot where his man parts should hang…

The centaur’s scowl only deepened. He bent at what would be a human waist, leaning on his spear and stuck his nose no more than six inches from hers.

Bethany gaped at the bearded face before her. She hadn’t expected his voice to be so musical or smooth when coupled with such a harsh visage. “I…”

“What are you? Druid? Gorgon?”

Deep brown eyes scanned her face, the scowl never leaving his features. “Humans are a myth.” 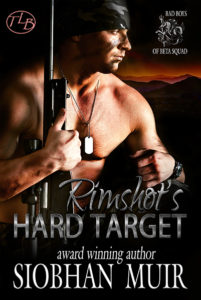