Drake MacGregor always adhered to the adage ‘let sleeping dragons lie’, until he slept with one.

In an effort to make up for his past as Vlad the Impaler, Drake has been living a small, quiet life in Three Lakes. As the town’s archivist, his knowledge of history and his place in it weigh on him. Drake has one desire—to rectify the atrocities committed in the name of his knightly order. Too bad he can’t keep his hands, or his fangs, off the local doctor, especially when he discovers she’s an actual dragon.

Aliandra Cantora del Viento is old enough and wise enough to ignore her attraction to the handsome historian, especially when her heart suggests he might be something more than he appears. Drake stokes her fires and curls her tail, and after a hot night in her clinic, the game is on. But he avoids her and nothing she tries breaks through his reserve, despite his obvious interest. He turns her on then apologizes for it, repeatedly. Not exactly the kind of relationship she’d hoped for yet she can’t walk away.

When a mysterious researcher arrives with his son, Drake becomes more edgy and irritable, and Aliandra must decide if she’s willing to fight for him. Especially when he might be her True Mate.

He bit me! He’s a vampire. Oh Goddess, he’s so sexy. Her thoughts cascaded rapid fire as she held her hand against her throat. The blood slowly stopped flowing beneath her talons, but her heartbeat only increased as her emotions banged around her skull like pinballs. She tried to take a few deep breaths to return to her human disguise, but her canines remained stubbornly long.

“I—I’m sorry, Dr. Cantora.” Drake MacGregor stared at her, dazed and unsteady. He covered his mouth with one shaky hand. “I’m just so hungry and if you hadn’t distracted me—”

“This is my fault?” She snarled and dug her claws into his lapels, jerking him nose to nose with her. “How is your biting me my fault?”

“If you hadn’t distracted me, I wouldn’t have forgotten to feed, and—”

“You haven’t fed?” Aliandra hissed with disgust. “What kind of a vampire forgets to feed? Hellwinds, man, that’s the stupidest thing I’ve ever heard.”

She swung him around, pinning one hand behind his back and propelled him across the room to one of the rolling doctor stools.

He sank down onto the cracked leather seat and eyed her warily, color returning to his cheeks as the blood he’d stolen worked its magic on him. She crossed her arms over her chest and clenched her jaws together to keep from tackling him and biting him back. Her body raged with a combination of arousal and excitement. He’d bitten her after nuzzling her shoulder like a dragon lover and her body wanted more.

But he’s a vampire.

And she wanted more of him, more nuzzling, more biting. She scanned his body, belatedly realizing why he hadn’t healed. He hadn’t fed and all his energy had kept him upright, but he couldn’t spare anything for physical repair. Mr. MacGregor needed blood and she was the closest donor.

He grimaced and nodded.

“Very well, Mr. MacGregor.” She removed her coat and scarf, draping it over the exam table as she gathered her courage. “You may feed from me to get your strength up.” She paused and looked over her shoulder at him. “You do know when to stop, correct?”

His mouth flattened with displeasure. “I am a mature sanguivore.”

Aliandra snorted. “A mature sanguivore wouldn’t let himself get in this position of being so weak.”

Drake drew himself up to his full height and his expression smoothed out into regal impassiveness. He looked like a king unimpressed with the pleas of his subjects despite having to look up at her while seated. But she wasn’t the one begging.

He’s not begging, either. Dammit.

“Now is not the time to sit on your high horse, Mr. MacGregor.” She tilted her head to hide the odd concern he’d decline to feed from her. “I’ve taken the Hippocratic Oath and you’re in need of medical attention, even if it’s to prevent starvation.”

Drake’s eyes flashed red and he unconsciously licked his lips, but he turned his face away as he shook his head.

“You already have. I’m just giving you permission this time.”

“I’m fine. What little blood I took from you has already helped.”

His color did look better and he sat up straighter, but she suspected he was nowhere near satisfied. Me, either.

“It may have helped, but I can’t let you leave and attack some innocent passerby if your hunger gets out of control again. I just thank the Goddess you attacked me instead of a human.” She smiled at his look of shock. “What, did you think I was human?”

Aliandra laughed. “You and Kate. Your expression is priceless. I’m not human, Mr. MacGregor, I’m a dragon.”

All the color he’d gained drained out of his face and he jerked to his feet, stumbling over the rolling stool in his haste. She reached for him, but he dodged clumsily in his attempt to get away. Unfortunately, his leg wouldn’t hold his weight and he lurched against the wall beside the metal shelves.

“Dear Goddess, please forgive me.” His face morphed into a mask of horror. “I’m so sorry. I never meant any harm.”

“Easy, Mr. MacGregor.” Aliandra softened her voice, wondering where his panic came from. “It’s all right. No harm done and I’m offering you what you need. Let me help you sit down again.”

“No, no, I swore I’d never do anything like this again.” He tried to retreat, but the wall held him fast.

“I understand,” she crooned, her hands up in a calming gesture. “Come sit back down and we’ll find another solution. Please, Mr. MacGregor. You’re injuring yourself worse.”

He stared at her, his eyes glowing scarlet in the semi-darkness of the room, but he made no other move to retreat.

He rose painfully to full height and limped back to the stool. Aliandra’s heart bled for him, but she stepped out of the way to give him his space. When he teetered dangerously to one side, she grasped his arm and helped him sit down. He hissed in surprise, but she held him until he settled.

“Now, before we do anything else, perhaps you’ll let me look at your leg once more.” Aliandra didn’t want to spook him, but she needed to get her hands on his body again. “I want to be sure you haven’t done more damage in your, uh, retreat.”

Drake snorted with derision. “You mean my chicken-shit panic?”

“I would never say such things.” She shot him a prim look, but couldn’t hide her smile. 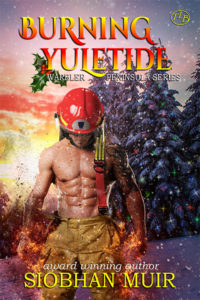 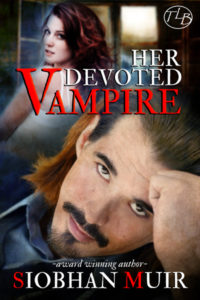