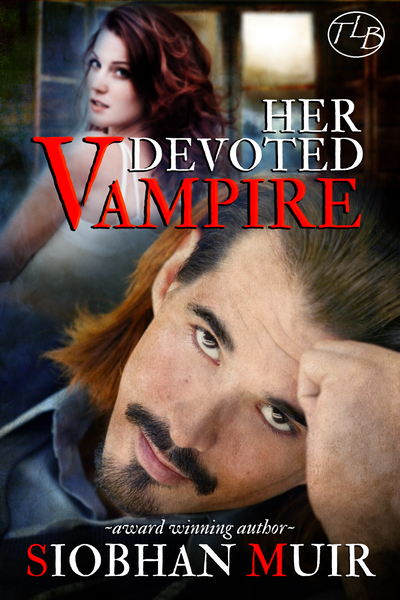 How far would you go to get away?

Bridget Shanahan’s life seems bleak and boring until she gets mugged and abducted from her favorite coffee shop by the sexiest man she’s ever met. Unfortunately, he’s a lunatic who believes he’s some kind of vampire savior surrounded by a security force of werewolves. Worse, he’s determined to keep her.

Fredrick MacGregor has been having visions of this woman in danger for the last six months. A woman he must protect at all costs. However, when he brings her home, she doesn’t believe in vampires or the Goddess, and she definitely doesn’t want to stay. But the sense of danger persists and he’ll do anything to keep her safe, even if it costs his own life to preserve hers.

Her kidnapper turned her roughly in his arms and pinned her to the wall at her back, his hands stapling hers above her head. Her nipples grew taut against the hard planes of his chest as his deep brown eyes bored into hers, his scarred face blazing with intensity.

“You’re mine,” he growled, and excitement shivered through her at the menace in his voice. “Never forget!” She stared up at him and swooned.

Bridget Shanahan damn near threw her book across the expanse of comfortable chairs and black lacquered tables beyond her own. She only refrained to keep from injuring anyone.

As if I’d ever sleep with a man who kidnapped me.

So much for suspension of disbelief. She’d picked up the cheap romance at the corner store in an attempt to cheer herself out of the funk she’d felt all week. Unfortunately, the book only served to illustrate how bleak her life was compared to the fantasy of the storyline.

What she really needed was a dark handsome knight to save her from her life.

A blast of damp air gusted through the doorway of Snickerdoodles, Bridget’s favorite coffee shop on the Boston Common, sending a shiver of cold down her back. The chill didn’t improve her mood. She tightened her fleece scarf around her neck and grabbed her coffee cup to warm herself with a drink. Nothing but air met her lips.

Doesn’t that just sum up my life right now?

She set the cup down and eyed her discarded book, but the stillness of the room made her look up. She wasn’t the only one. Every woman in the coffee shop had her gaze locked on the entry, some even craning their heads to see around the potted plants and support columns. Wistful sighs erupted, providing an undercurrent to the soft conversations filled with words like “sexy”, “hottie”, and “handsome”.

Did some sort of celebrity walk in? She scanned the person who’d walked through the door as he stepped into clear view.

Hot excitement hit her, and she trembled. Sweet mercy.

While not tall, the man emanated such raw power it was impossible not to notice him. Broad shoulders filled out the black leather trench coat that brushed his ankles, and long dark hair hung down his back from a gathered tail. A fedora straight out of the 1930s Chicago Mafia shaded his face, but she spied pale skin and a neatly trimmed dark mustache and goatee.

Her heart pounded with anticipation, and excitement made her shift in her seat as the mystery man waited patiently for his turn at the counter.

Bridget blinked. What’s wrong with me? She shook off the odd spell and scrubbed her face with her hands, trying to ignore the dark stranger. The girl behind the counter served the person in front of him as quickly as possible but became solicitous and sweet as soon as the man in the hat stepped up to order. Bridget inwardly rolled her eyes even as she strained to hear his order.

I wish I could hear what he says.

Wait, what? Why in God’s name did she care who this guy was or what he sounded like? He didn’t look like any celebrity she knew and she’d never been into the Hollywood scene, anyway.

She snorted in disgust and jerked her attention back to her book. She fiercely told herself to read and ignore the guy in the hat and coat. It doesn’t matter that the story’s unbelievable. She managed not to hear what he’d ordered or notice where he sat down.

She could keep her eyes to herself. But someone called out “Fredrick” and her gaze tracked the mysterious man as he rose from his seat three tables away. He moved with the liquid grace of a predator and her heart fluttered with primal excitement even as her mind scoffed. The server gave him a dopey smile and held the cup out to him like an offering. He smiled back at her, took the cup then swept the whole room with his gaze as if searching for something.

Please let it be me.

Reality crashed into her skull and made her blink. I gotta get a grip on this Miss Lonely Heart trip I’m taking. But she didn’t turn her head away.

Surprise and an odd recognition skittered through her when his gaze met hers. Eyes as dark as the night sky framed by long black lashes sucked her in until she lost track of time. She fell into those eyes, warmth and yearning wrapping around her, promising comfort to drive away the bleakness. His lips curved into an inviting smile, and he winked, sending her heartbeat into overdrive.

I want him. Bridget broke the eye contact and gave herself a mental shake. Must pick up my book or go home before I do something stupid.

Motion out of the corner of her eye made her turn her head against her better judgment and the mystery man grabbed his jacket before approaching her table.

That voice… She’d heard it before, but she couldn’t place it and it did wonderful things to her insides.

“I…uh, yes, of course.” She gestured to the open chair beside her.

“Thank you.” He set his coffee down and settled the coat over the edge of the chair before sliding into the seat. “The book not to your liking?”

“Your book. You keep giving it dirty looks. I take it the story is disappointing.”

She grimaced and nodded. “Yeah. More unbelievable than anything else.”

“Yet you’ve chosen a fantasy, no?”

“Even fantasy has to have an element of reality or there’s no suspension of disbelief.” She shrugged. “Maybe it’s because I can’t relate to the heroine at all. She seems…vapid.”

“Vapid?” He laughed in surprise, and it warmed her from the inside out. “Excellent word. Definitely paints a distinct image.”

Her mystery man’s smile enticed one from her as she took in his appearance. The dark ponytail fell smoothly over one shoulder like a silk rope. She wanted to run her hands through it. It would be thick, heavy, and warm, and the scent would fill her world.

God, I’m pathetic. I should get going home now.