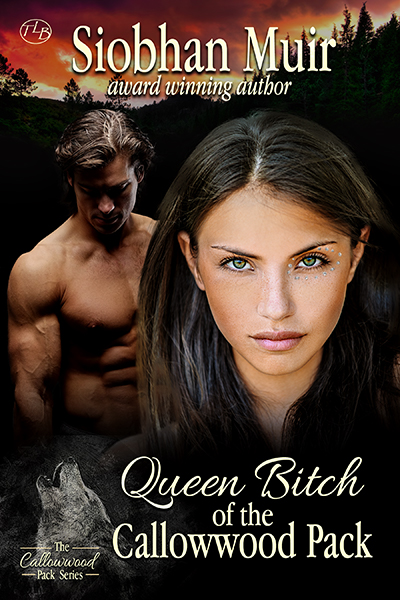 Waking up on her front porch with sticks in her hair isn’t Julianna’s idea of a good time, but returning to her hometown to bury her father isn’t any better. When the hot guy she crushed on since high school invites her to a party, she thinks life might be improving. Jeff’s the future Alpha of the Callowwood werewolf pack. She’s been nominated as a candidate for the next Luna, the Alpha female—and Jeff’s mate. All she has to do is pass the Seven Tests of the Luna. This is perfect, except Julianna knows nothing about being a werewolf.

Jeff Lightfoot lusted after Julianna for years, even when he thought she was human. Now she’s home and all wolf, his True Mate. She’ll be his Luna—if she passes the tests. He wants no one else, but pack politics trump Mother Nature, and he’ll have to go rogue to choose Julianna if she doesn’t pass.

But someone’s determined to make her fail the tests, and the rivals for Jeff’s attention have more clout in the pack. Throw in a few family secrets, and Julianna discovers not everyone is what they seem. For the future she wants, she must pass the tests to become Queen Bitch of Callowwood—or watch Jeff take another woman as his mate.

This is a revised and re-released title previously published with Siren Publishing. It has been edited and expanded upon.

“Welcome back, wayward daughter.” The woman’s weathered voice seemed familiar. “I’m sorry for the loss of your father, but I’m glad to see you’ve grown so much since you were last here. When you left, you seemed so lost, but I see you’ve found the best part of yourself and I’m happy for you.”

Julianna clearly heard the quotations around the word “father” and wondered where this woman fit into her parents’ lives. She resisted the urge to frown. How does she know me? The old woman’s words suggested she knew Julianna had been adopted as a baby, but what was that about the best part of herself?

Oh glory, does she know I change during the full moon? What the hell did she say to that?  She shot a look around the room and met several eyes. Does everyone else know? Is it stamped all over my forehead?

But her head began to spin as panic swamped her and her knees threatened to collapse. She staggered to the side, colliding with her mother. The sounds and scents of the bar flooded through her senses, pushing her into a spiral of encroaching darkness.

“Julianna!” Beth tried to catch her, but Julianna outweighed her by at least eighty pounds. “Are you all right?”

She grasped at the threads of consciousness, trying to stay upright and console her mother, but everything slipped away too quickly. Even the confident, strong part of her whimpered in fear as the darkness threatened to take them down.

Can’t fall. Too dangerous. She struggled to stay vertical, but she couldn’t find “up” anymore.

At the last moment, a pair of strong arms wrapped around her as someone dragged her to one of the booths. The scents of the desert after the rain and mountain mornings in summer enfolded her, and her assertive side howled in jubilant triumph. Everything else faded away.

Safety. She’d found it for the first time in years and she wanted to stay.

She heard the murmur of concerned voices, but only as distant reminders of fear. She saw her mother’s frightened eyes, but couldn’t remember why Beth was upset when everything felt so right.

I’m okay, Mom. She wanted to say the words aloud, but her voice didn’t seem to work. Beth tried to get her to answer inane questions like “are you all right?” and “do you need to sit down?” Aren’t I already sitting?

She closed her eyes and settled in wherever she was. in the embrace of whoever held her against his hard chest. She loved his scent and the strength she felt in his body. She’d missed that her whole life, even while with Terence. Terence’s weakness and insecurity made him a pathetic excuse for a male who’d needed reassurance from the females he fucked. This male’s strength told her he’d make an excellent protector. She closed her eyes and burrowed into his powerful heat seeping through the layers of their clothing. Glory, he feels good. I’m so cold.

A comfortable rumble pushed against her ear where her head pressed against his shirt. It took her a moment to realize he spoke to someone, but the sounds didn’t make sense. She ignored the words as she gave into the comfort of resting in the man’s arms. It felt right, settled, as if all the pieces of her life finally fit together properly. She finally fit in somewhere. She belonged here, with this male. Excitement shot through her like lightning, both electrifying and soothing, and she sighed with contentment.

“Is she going to be all right?” Her mother’s worried voice penetrated the comfortable, settled feeling.

Julianna knew that gravelly voice. It sent little bullets of excitement and arousal shooting through her. The arms around her squeezed gently.

“She’s just a little overwhelmed with all the recent events.” The Paiute woman’s voice soothed, and a warm hand touched Julianna’s arm. “She’ll come out of it soon.”

“She is west of left field, isn’t she, Sebrina?” The owner of the gravelly voice sounded hopeful.

That’s Jeff’s voice. Recognition dragged her further out into reality, and she realized she lay in his arms.

“Yes, my son, but we must give her time to understand it fully.” Sebrina’s voice held caution.

West of left field? Understand it? What are they talking about?

Julianna struggled to sit up and get a hold on herself. Chagrin washed through her. How embarrassing to faint at her father’s funeral in front of everyone. And now she lay in Jeff’s arms.

Not such a bad place to be, her Sister remarked.

Oh, shut up, you’re not helping. She had to pull herself together.

“I think I can sit up on my own now.” She pulled out of Jeff’s embrace and immediately missed his warmth.

He let her go reluctantly as if unsure of her steadiness, shifting his body over so she could sit on the cold booth bench. She told herself it was better this way. Jeez, she’d swooned like some silly damsel in a Jane Austen novel at the first sight of him. She gritted her teeth and squared her shoulders.

Gathering her courage, Julianna forced herself to stare up into Jeff’s green-gold eyes. “Thanks for making sure I didn’t hit the floor. That would’ve been really embarrassing.”

He grinned at her, stealing her breath. “Couldn’t have that.”