Week 357 of #ThursThreads had many fantastic tales. I’m honored to see all the writers come to tie a tale as we complete our seventh year. If you’ve been doing it a while, thank you. If you’ve just found us, welcome! May you come back again and write more great flash. Thousand thanks to George Varhalmi for judging this week. Check out the #ThursThreads #flashfiction group on Facebook or the #ThursThreads Group on MeWe to keep up with news, etc.

George says: I really like the tale with your Reaper. And I liked the Reaper’s humanity because she took pleasure in both life and death. She didn’t want the new souls getting pushed out by one that needed to move on. Loved it.

George says: Mira is more than what she appears to be. It was a very sweet story. I’m really wondering what those furballs will be. 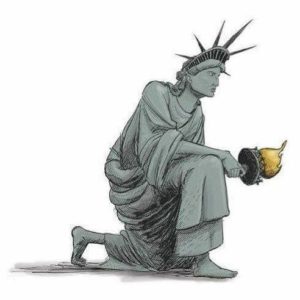 George says: I really loved this tale. I found it adorable, but it really made me think of “keep your friends close, and your enemies closer.” What a way to weed out the bad apples. I found it fascinating and a great great story.

Sheila sat on the floor, laughing as the puppies swarmed her. Sharp teeth nipped her hands, drawing blood.

“No clue. Mom showed up here as a stray. Looked like some kind of hound mix, maybe some pit. I put food and water out for her but couldn’t get near her. One day she disappeared and I found the pups under my garden shed. Their eyes weren’t open yet, so I bottle fed them.”

“And now you’re just giving them away?” The one that had nipped her was now tugging at her pant leg with fierce determination and ferocious growls.

“I can’t keep all of them. I’m keeping one or two, but…” She shrugged. “Half a dozen little monsters is a bit much.”

“I’ll think about it.” Sheila stood up and started for the door, but the puppy refused to let go of her pants.

“I think maybe you’d better take that one with you unless you want those pants turned into a pair of capris.”

“I think maybe you’re right.” Sheila scooped up the puppy who happily began chewing on her hand instead of her pants.

A week later, the puppy was back, still licking blood from her teeth and lips as Tricia scratched her ears. One of the other pups was out to a new home. Like Sheila, that owner would disappear, the pup would return, and Tricia would mark another name off her list.

Congratulations Three Time Winner P.T., and Honorable Mentions Kel, Jo, and Cara! Don’t forget to claim your badges and display them with pride. You certainly earned it!