Week 456 of #ThursThreads had many fantastic tales. I’m honored to see all the writers come to tie a tale as we head toward the end of our ninth year. If you’ve been doing it a while, thank you for sticking with us. If you’ve just found us, welcome! May you come back again and write more great flash. Thousand thanks to Bill Engleson for judging this week. Check out the #ThursThreads #flashfiction group on Facebook or the #ThursThreads Group on MeWe to keep up with news, etc.

Bill says: As a very occasional TT judge, it is an honour to offer my take on the contributions to #456. I have to say that I love the number…it would make a respectable partial hand of crib.

I offer this quote from Einstein (Albert, not Gregor) to set the stage for my observations.

“Whoever undertakes to set himself up as judge in the field of truth and knowledge is shipwrecked by the laughter of the Gods.”

I noted on Facebook the obvious fact that I am not Einstein.

My father did have a Cousin Albert, however. That’s the closest I got to genius.

The prompt this week was “These are the words you must unlearn.” I am sure that many of us might agree that some of those words are “Covid-19”, “Coronavirus”, “mask”. “lock-down”.

Irregardless (I am so happy that this word is now kosher even though Spellcheck has yet to buy in) words are our currency as writers, words and ideas. I enjoyed all of this week’s contributions, yet my assignment was clear. And I confess I like to have a bit of creative merriment with this process.

Bill says: A couple of years back, I referenced Stephen King in a TT judgement. That time, it involved the movie Christine. This time, it is Carrie. Of course, this Carrie is not as inflammably damaged as King’s Carrie…so far as we know. Regardless…irregardless, she is quite irritating. Or is it ritating? Which my Spellcheck immediately wanted to spell “rotating”. But that would be Regan…what she does with her head in the Exorcist.

In any case, I enjoyed the linguistic lesson, the clash of personalities, in the story, although M.T. or rather Martha Roberts, did dig somewhat of a numerical hole to fall into when she said, “and unlike math, you cannot add a negative to a negative and make a bigger negative,” which probably had little to do with M.T.’s counting of her words, sans title, and coming up with 146…10 square short of the actual finish line. But I don’t mean to quibble. And probably shouldn’t have mentioned it.

Bill says: I am not a sci-fi guy, but this little tale had me from the get-go especially with the second line, “The images strobed before his eyes. There was a pigeon, a smoothing iron, a pair of high heels. Every time the picture changed, he described what he saw.“

Of course, what immediately came to my mind was the memory portion of the previous tenant in the White House’s cognitive test,

”Person, woman, man, camera, TV.“ I doubt that Mark was thinking of that or wanted the reader to be thinking of it but that is the freedom of reading, and judging.

I enjoyed Micah’s creation, his orientation into his existence, but sadly could not stop thinking about you know who.

Perhaps in time I will.

Bill says: This inquisitive tale of ancestry also had an intriguing list: “She was a direct descendent of either a werewolf, a vampire, a robot, or even a prefabricated monster, a la Frankenstein.“ Additionally, Charlene took the prompt, referenced the aforementioned list and has her character, Stella,  milk it relentlessly, purposefully, mindfully as follows, “These are the words you need to unlearn. Forget them, totally. Eradicate them from your mind. Remove them from your vocabulary. They are irrelevant to you, do not define you, have nothing to do with you. Your past is in the past. Move on; reinvent yourself.“ 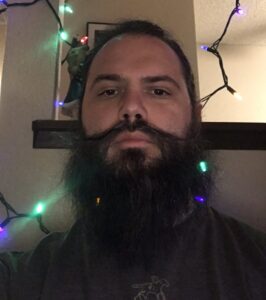 Bill says: This beautiful little story, a flash lullaby I suppose, easily transported me into an unfamiliar realm. I am not always packed and ready to go along into new emotional territory but this time I went quite willingly. I particularly enjoyed the use of the prompt or rather, the third sentence at the end of this trio of sentences, “These are the words. You must unlearn the primacy of vocalizations. The most powerful sounds in our world are the ones we can’t hear.”

I would think that a child named Melody would usually be willing to feel the magic of any song.

“What is your favorite lullaby?”

Maester Sforzando smiled at Melody. The five-year-old knew the answer to that one; but considered it seriously just the same.

“That is a good one!” her teacher laughed.

His smile was so pretty, and he was different from the priests. Sometimes Melody thought he must be an angel.

“I would like to teach you a different way of singing it.” He continued, laying three scrolls flat on top of one another where the light from all the candles collected in the center of their table. “These are the words. You must unlearn the primacy of vocalizations. The most powerful sounds in our world are the ones we can’t hear.”

Melody scrunched her face at the marks on the scrolls. They didn’t look like words to her, and she was Mother Josephine’s best reader!

“I will demonstrate. Try to experience the song with your whole being. Not just your ears.”

Melody rocked back on her heels as Maester Sforzando began singing. Listening to his rich deep voice was her favorite thing about their singing lessons. At first the lullaby lyrics seemed the same as always, and Melody didn’t see anything different about how Sforzando was singing. Then she closed her eyes and felt something she couldn’t describe under the music. Like in the songs she made up by herself!

“Did you feel it? The Song Magic?”

Congratulations Nine Time Winner David, and Honorable Mentions Mary, Mark, and Charlene! Don’t forget to claim your badges and display them with pride. You certainly earned it!