Week 442 of #ThursThreads had many fantastic tales. I’m honored to see all the writers come to tie a tale as we start our ninth year. If you’ve been doing it a while, thank you for sticking with us. If you’ve just found us, welcome! May you come back again and write more great flash. Thousand thanks to Virginia Nelson for judging this week. Check out the #ThursThreads #flashfiction group on Facebook or the #ThursThreads Group on MeWe to keep up with news, etc.

Virginia says: The tone of this one had such a dramatic shift in such a short bit of prose. It started out feeling like romantic tension, then moved into a shared secrets kind of space. By the end, though, it was downright conspiratorial. Well done on changing moods!

Virginia says: This one was delightfully creepy and surprisingly well-rounded considering the limited word count. I like how you managed to do a character swap (she’s scared, no she’s acting, no she’s actually scared) in such a flash of fiction as well. Just great writing! 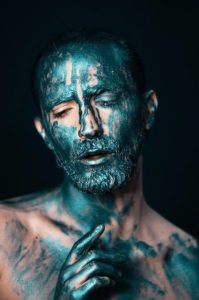 Virginia says: The paragraph [about the needle and spiders] is why this one won for me. The description, especially the spiderwebs with their glassy eyed spiders? Just gorgeous and paint the picture so flawlessly in my mind. LOooooOOooooOOove this.

The skin was pale and distended and marbled where it had stretched. The flesh beneath was hard to the touch. I could trace the shape of a head if I pressed more firmly, the creature inside turning away as though ashamed.

“Well, you said you wanted children but couldn’t afford to miss the time from work. I worked something out. I spoke to the shaman.”

Dax looked pleased with himself. He’d got that grin on his face. He was sitting at the foot of the steps, his back against the cellar wall. I’d been bound and incapacitated when I woke up a few minutes ago. We’d only kissed for the first time last night.

What had he done to me?

“It’s going to be twins. Two boys. They’re not going to be identical, but they’ll be close. Closer than brothers could ever be.”

The shaman stuck me with a needle, a sudden pain flaring and then ebbing away. My arm became numb, my fingers weakening. My hand grew heavier and fell to the floor, my head tilting back until all I could see was the ceiling. There were spiderwebs lacing the gaps between the beams, the glassy eyes of their occupants watching me.

“I’m not sure what you mean.” My lips were not my own, my voice slowed like a gramophone record played at the wrong speed. The pendant lamp without a shade began to dim.

Congratulations TWENTY TIME WINNER Mark, and Honorable Mentions Bill and Marci! Don’t forget to claim your badges and display them with pride. You certainly earned it!