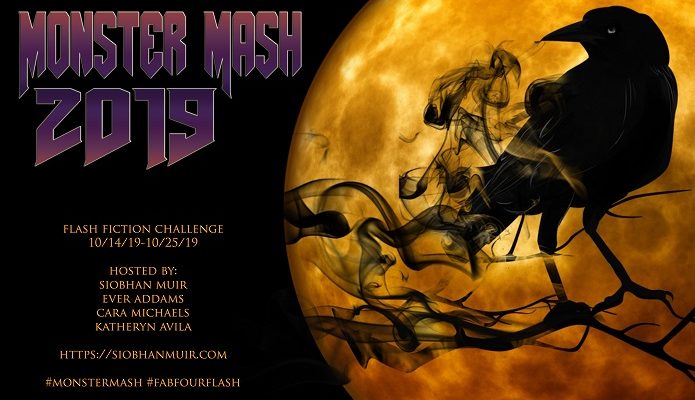 It’s time for Samhain/Halloween and we have just the thing to get you into the mood. This year I get to host the Monster Mash flash fiction challenge. I’ve teamed up with Cara Michaels, Ever Addams, and Katheryn Avila as co-hostesses for a quartet of flash challenges, but I get to start us all off, hosting #MonsterMash2019.

This year, we offered four quote prompts from some of our favorite scary(ish) movies. My personal choice is Pitch Black, one of my favorite scary movies with the best anti-hero, Richard B. Riddick.

and the line that stuck out to me was:

But it ain't me you gotta worry about now...

I’m writing a new set of plot bunnies (like I need more of those) about a SpecOps team composed of all women. One of these women is a former Army Ranger who just happened to stumble into my Rifts world where she was supposed bring in a wayward soldier and finds out he’s a centaur. That is only the first rude awakening.

A low, menacing growl sounded behind Roxanne – much too close for her continued health. Singing wasn’t something she did, even as a kid, so she doubted her ability to charm anyone with her voice. Not that she had much choice, but since she wasn’t sure she could carry a tune, she was likely screwed either way. She’d seen a lot of shit in her career as a Special Operator, but death by a mythical creature hadn’t been on her list.

She wracked her memories for the way to kill or disable a Manticore, but she came up blank. How did one take down a winged lion with a scorpion’s tail?

“What?” The centaur frowned but never took his gaze off the beast behind her.

“Where is the Manticore in relationship to me?” She rolled her eyes as she slowly maneuvered her M-16 in front of her. “Six o’clock? Four? Eight?”

Damn, didn’t they have clocks and military time here? She mentally smacked her forehead. She was complaining that centaurs didn’t use pocketwatches. Get a grip, Bailey.

Roxanne took a deep breath. “Is it directly behind me? To my left or to my right? And how far away?”

“Oh.” Swift briefly shifted his gaze to her before looking back at their adversary. “Six meters behind you to your right. Tail up but not cocked.”

“That’s good, right? The last thing we need is a cocky tail.” She removed the sight from her rifle and settled her shoulders. “A Manticore is basically a big ass cat, right?”

He nodded slowly. “I wouldn’t use that term, but yes, they’re like cats.”

“Good.” She swallowed hard and slowly turned around. Glory, I hope this works.

The Manticore was a helluva lot more impressive than she expected. This one appeared to be male with the typical lion’s ruff and a tawny coat with russet highlights on its paws. Of course that could be bloodstains from its victims. Extra long canines reminiscent of the saber-toothed cats of her world overhung its lower jaw as it growled. A set of four russet-tipped horns grew from its forehead and lower jaw and matched the edges of the spines near the base of its scorpion-like tail. Its wings remained folded against its back, but they had their own set of wicked spines at the wingfinger tips. Deep golden eyes focused on her and the scorpion tail lashed.

“I’m sure. What are you going to do about it?” Swift sounded more annoyed than amused now.

“I take it you’re not going to do anything.”

He snorted. “Centaurs can usually outrun Manticores with enough of a head start.”

And humans, no doubt. Roxanne grimaced. “Good to know.” She didn’t have that luxury. Instead, she switched on her laser sight and pointed it at the ground. “Please let this work.”

The Manticore growled again until it caught the flash of the little red laser dot on the rock just a few steps away from it. The growl ended in a sound much like a question and its gaze fastened on the dot.

“That’s it, pretty kitty, just chase the red dot.” She wiggled the sight and the Manticore tilted its head. “Go get the dot, kitty.” She kept her voice soft as she shifted one step toward Swift. “You almost dressed?”

“That’s a helluva question, Bailey.” Now the amusement leaked into his voice. “But it ain’t me you gotta worry about now.”

“Oh, I’m not worried.” She inched her way backwards as the Manticore crouched, its butt wiggling as it focused on the red laser dot. “I’m just going to use you as transport—holy fuck!”

The Manticore didn’t leap, it slammed its scorpion’s barb into the rock with the red dot, shattering the stone into gravel. She swallowed hard, but remembered to move the sight so the creature could find the spot. She jerked it to the side and the Manticore pounced this time, both paws “covering” the light. It peeled its paws away and she zipped the dot farther from where Swift stood. She hoped she’d be able to swing up onto his back like she used to do during her rodeo days in college. That’s if he’ll let me ride him. She damn near choked on the sexual innuendo of her thoughts.

Rein it in, Bailey. Oh she cracked herself up.

“Be ready to run, Swift.” And she leapt for him.