It’s that time of year again. The time when everything turns red, white, and pink with a unhealthy helping of chocolate and flowers. This year, Katheryn Avila is hosting the Love Bites flash fiction challenge, but you get to pick the romance trope for your tale. #LoveBites2020. Click HERE to enter your link and see the other entries.

This year, we offered five different romance tropes found in romance novels to choose from to set your muse on fire. I chose the trope “Forbidden Love” for my ineligible entry, the trope of two people loving each other even if they’re not supposed to. And the story that jumped out for me is a plot bunny that just won’t leave me alone. Enjoy.

SNAIFU. Roxanne thought the unit’s name was stupid – Supernatural Anomalies Investigative Field Unit – and sounded way too close SNAFU. She let her gaze slide over the landscape as the van pulled off the two-lane highway. They passed through a fence, rumbling over a cattleguard before heading down a hill. If she hadn’t been there before, she would’ve wondered if they were taking her to a Black Site.

Might as well be for all I can talk about it.

She didn’t think even her escort knew where they were actually taking her as they drove up onto another plateau. Leaving her team, friends, and family daunted her, but the chance to see Ambrose again overrode the last of her worries as the van pulled up in front of the wildlife sanctuary’s visitor center. She unclipped her seat belt and opened the sliding door before the men in front could get out.

They both gave her a non-plussed look as she moved to the back to grab her duffle bag. It wasn’t much, but where she was going, she didn’t need the accoutrements of this world. Hell, she wasn’t even bringing her service weapon or her cell phone. She threw the bag over her shoulder and waited on the men.

They didn’t say anything, just led her into the visitor’s center. She pulled off her cover and scanned the inside. She didn’t see anyone she knew, but that wasn’t a surprise. Mack had told her they hired students and interns to man the desk in the summer. Though the calendar said May, the weather wasn’t cooperating.

“Can I help you?” An older woman with silver hair wrapped up in complex braids settled behind the desk with a warm smile.

She picked up the phone and spoke into it while Roxanne went back to staring at a poster illustrating the different species found on the sanctuary. Antelope, mule deer, moose, elk, grizzly bears, coyotes, wolves, a whole host of rodents and birds and weasels, buffalo, skunk, cougar, bobcat, badger, and the occasional wolverine. And let’s not forget centaurs. Yeah, not on this side of the Rift.

Roxanne let her gaze drift out the windows, but she wasn’t seeing the Wyoming wilderness. Her vision filled with the river valley around Cederfell, the centaur village where Ambrose had been stationed. She pictured his broad shoulders stretching his natural camouflage vest, held down by the leather straps of his bow and quiver. Tears filled her eyes and her throat closed. It had been so long. He was sure to think she’d abandoned him for her own world.

Aw glory, please say he hasn’t written me off.

Her new rank in SNAIFU. Yay, promotion. Her CO, Major ret. Mack McMacken made her turn and salute. “Yes, sir.”

“I’m glad you made it back all right. While I intend to go over a few things with you, right now I need you in the training yard. I’ll finish with your escort and meet you there.”

“Yes, sir.” She saluted again and headed for the doorway to the back of the visitor’s center, her heart in her throat.

Passing through the Rift always made the hair at her neck stand up, but her heart thundered with the anticipation of seeing Ambrose again. If he hasn’t been court martialed. That didn’t worry her as much as his rejection. They’d had a forbidden love. Centaur and human weren’t meant to be together. But her heart had other ideas, and she hoped his had, too.

She stepped out of the stone temple into the light and held her breath. He stood bathed in the sunlight, burly arms crossed over his chest, and his dark head bent as if lost in thought. But she’d recognize him anywhere, especially with that one white sock on his left hind foot. He was so beautiful, the tears started again and she gritted her teeth to keep them at bay.

“Ambrose.” She whispered his name like a prayer, but cleared her throat as she reined in her emotion. Hahaha funny. “Corporal Swift?”

His head came up with a jerk and his nostrils flared as if taking in her scent. Then he was there, his arms wrapped around her back and his nose buried in her neck as he lifted her off the ground.

And just to give you a little teaser of where this tale is going, here’s the cover to The Siren and The Centaur, coming soon. 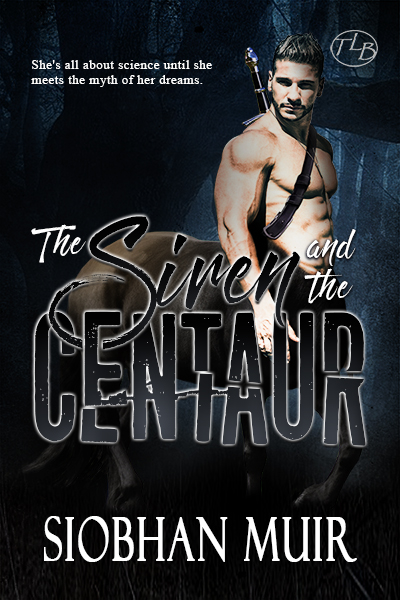