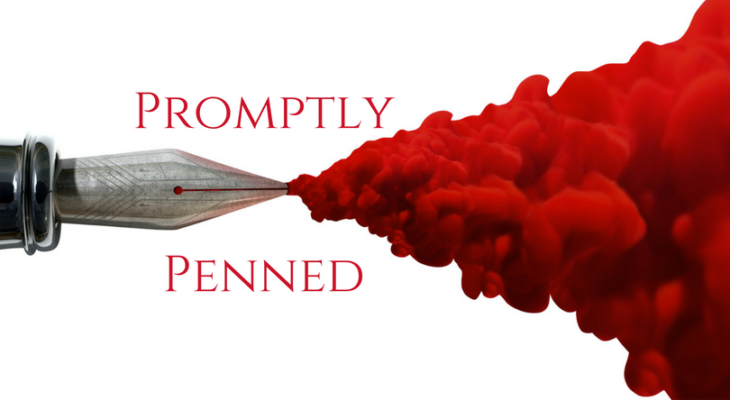 We’re back with the Promptly Penned flash fiction for June and the prompt lines took me a little while to puzzle out. I took it to mean the second speaker knew the first well enough to know what they like.

It’ll be bold in the narrative, and this is in an upcoming tale, BLOOD HOUND OF CALLOWWOOD, a paranormal werewolf romance. 😉 Happy reading!

~~~~~~~
Eloise let her breath out in a sigh as she slumped over her beer on the bar at the Wolf’s Den, trying to find her usual good humor. But it had fled ahead of the months her sister Nora had been missing. The cops had no leads. Hell, even the Alpha of the Pack was coming up empty and that was saying something. If Richard with all his contacts couldn’t find Nora, she was probably dead. And killing a Moon Singer took effort.

Add to that Eloise’s broken engagement to Tommy Scatterstone, and her life kinda sucked at the moment. Except, being married to that dog Scatterstone would be even worse. Yeah, she’d dodged a bullet there. Too bad it felt like one more failure on her part.

“Hey, if you were any more down-in-the-mouth, you’d look like a hound dog.”

Eloise glanced up to meet the concerned gaze of her best friend and Luna, Julianna Lightfoot.

“I guess I’ll have to work harder. I haven’t quite gotten my mope on yet.” Eloise snorted before she took a sip of beer. “What are you doing here tonight? I thought it was your night off.”

It was specifically why she’d chosen to come to the Wolf’s Den tonight. Julianna was the manager and worked most nights, but Eloise hadn’t wanted to bring her best friend down with her blues.

Julianna rolled her eyes. “It is my night off and I wanted to hang out with my best friend. Who I just happened to find at the bar where I work. So here I am. Why the hell didn’t you tell me you were coming here tonight?”

“Because I wanted a drink and this is the only bar for miles, but I didn’t want to give my unhappiness to you.” Eloise shrugged. “I can’t seem to shake the doldrums and they aren’t getting any better.”

Julianna slid onto one of the stools as Woody Scatterstone, Tommy’s younger brother, brought her a ginger beer. “Thanks, Woody.” She took a sip. “Do you want to talk about it?”

Julianna nodded. “I’m sorry to hear that. I wish there was something I could do to make up for the loss of your sister. I haven’t heard anything from Jeff or Richard on that score, by the way.”

Eloise dipped her chin. “Yeah, I figured you would’ve told me if you did.”

“Definitely.” Julianna bit her bottom lip. “But I have heard something else. You know, if you’re interested.”

“Oh?” Eloise tried to dredge up some interest. “What about?”

Yearning and need bloomed in Eloise’s chest, but she tightened her grip on her beer and tried to keep her expression mild. “What about him?”

“Are you sure you want to know? Because I don’t want to bother you with something boring.”

Eloise gritted her teeth to keep from snapping and affected a nonchalant shrug. “It’s been so long. I’m probably not interested in him anymore.” It was a lie and Julianna could probably smell it on her, but Eloise had to protect her bruised heart as much as she could.

“Oh, honey, I’ve seen his Instagram; you’re definitely still interested in him.” Julianna snorted. “Hell, if I wasn’t mated to Jeff, I’d be interested. Do you know he hiked the entire Pacific Coast Trail last year?”

Kyle had gotten permission from Jeff to travel away from the Pack and had taken three months to hike the Trail so far from home. Eloise hadn’t told anyone, but she’d counted the days and watched his social media profiles to keep up on his progress. Not that she’d been stalking him or anything.

But ever since Julianna had asked her if Kyle was her True Mate, Eloise hadn’t been able to completely banish him from her thoughts. At least not as well as Kyle seemed to have done with her.

“That man is sexy and strong and athletic.” Julianna shook her head and whistled. “Definitely a helluva catch if you ask me.”

“I didn’t.” Eloise didn’t need to. She knew how perfect and sexy Kyle was. And now he was completely out of reach. No longer interested in a beta bitch who’d reached for an asshole alpha and then threw it away.

“I told you if you didn’t want to know—”

“Just spit it out already,” Eloise snapped then clamped her jaws together and lowered her head, not meeting Julianna’s eyes. “I’m sorry, Luna. That was inappropriate of me. I’m having a hard time, but that’s no excuse to take it out on you. Please, forgive me.” She tilted her head to the side and exposed her throat in case Julianna wanted to take a swipe at her for being obnoxious to the Queen Bitch of the Callowwood Pack.

“Apology accepted, Eloise. And I know you’re not in the best mood. I’m sorry I teased you.” Julianna laid her hand on Eloise’s arm. “I wanted to tell you that Kyle’s back and he’s heard about your sister.”

“No, that’s not what I meant. I meant he’s heard something about your sister. He told me to give you his new cell number and give him a call.” Julianna handed her a little post-it note.

Eloise stared at it before meeting Julianna’s gaze. “Thank you. Why didn’t he give it to me himself?”

Julianna smirked. “I guess he figured I’d see you before he did, since you’re in my cadre and all.” She winked as she pushed off the stool. “Give him a call. Find out what he knows, and see if there’s more there than just info.”

Julianna rolled her eyes. “You’re no longer engaged to Scatterstone, and Kyle hasn’t gone out with anyone. Hell, from what I can smell, he hasn’t had sex with anyone since I was chosen Luna. You’re both free to start any kind of relationship you want. And if he’s your True Mate…”

She let her words trail off and winked.

Eloise huffed a laugh, some of her sorrow lifting for the first time in months. “Yeah, yeah, I know. I should pounce on him.”

“I was thinking more biting him to make sure he’s yours, but what do I know? At least you don’t have to jump through political hoops to snag him. You just have to get him to agree.” She grinned. “Give him a call. And definitely check out his Instagram.”

She blushed as the Luna’s words washed over her. “I love you, too, Julianna. Thanks for bringing me this.”

“Yes, Luna.” She waved Julianna out and picked up her phone.