A Collection of Sexy Spanking Shorts with a Royal blush. 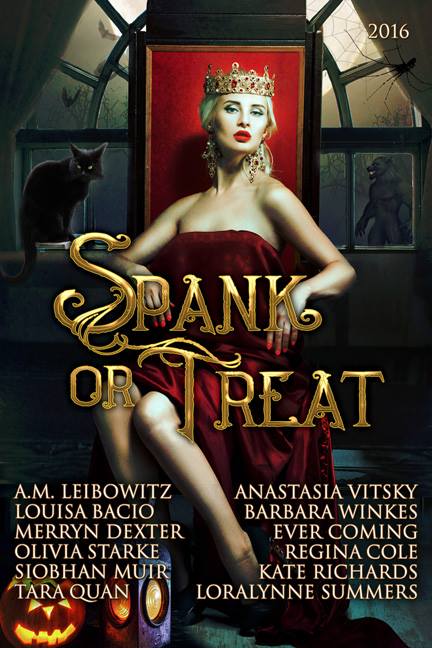 PUNISHING THE PANTHER by Tara Quan
A scion of two Capital Hill political dynasties, water mage Aaron Masterson already faces overwhelming media attention. When a photo of his naked butt shows up on a gossip blog, he is forced to confront the panther shifter stalking him around town.

IN DEATH’S SHADOW by Siobhan Muir
All Princess Maia has to do to get her life back is find the dryads’ Key with the help of Master Assassin Quinn Tarlen, if he doesn’t kill her first. But nothing’s ever simple when magic is involved and death isn’t the worst outcome if they fail.

IF THESE WALLS COULD SPEAK by A.M. Leibowitz
Pam’s body doesn’t feel like home to her anymore, and she wonders if it ever will again. After turning to a friend for advice, she discovers her wife, Zayne, has a surprise for her. With a little encouragement and a lot of love, Pam is beginning to heal.

THE PACK PRINCESS AND THE HAMMER by Merryn Dexter
A bloody brutal past might be too much to overcome for Quinn and Nikolas. Can they find happiness, or is there a missing piece to their puzzle?

ALL THAT GLITTERS by Loralynne Summers
Tylanus has had his eyes on Merry for quite some time, but Merry has given up hope on ever finding someone to accept her for who she truly is. Convincing her of his feelings will require an unusual approach for this Wizard to break down the walls his Princess hides behind.

GENESIS by Barbara Winkes
As if a romance between a vampire and a witch isn’t complicated enough…Daphne and Madina don’t know it yet, but they’re going to be at the center of a revolution.

TERRIS by Anastasia Vitsky
Named for the star of the East, Terris longs for the educated, genteel life her father promised. Instead, she finds herself as the second wife of Jakal, a despised Northerner. Then, fate brings her a new sister wife. What will happen next?

ONE NIGHT TO FLY by Regina Cole
Ginger never expected that the blind date she hadn’t asked for would be the revelation of a lifetime. Baird’s more than he seems, and their midnight flight is the start of an unexpected journey that will lead her to both passion and discovery.

ALL HALLOWS EVE OR BUST by Louisa Bacio
Finding the right color for the Halloween ball isn’t a passing fancy for the Princess & the Pea when it comes to her beloved Sleeping Beauty. The colors and relationship go a little mismatched until Briar Rose takes matters into her own hands.

A KISS BY MOONLIGHT by Olivia Starke
Morgan invests in an old plantation in hopes of getting a fresh start. She scoffs at rumors the place is haunted until she meets the home’s naughty ghost. Virginia is a playful belle who loves spanking her new housemate with a hairbrush. The last thing Morgan wants is a relationship—especially with a flirtatious ghost. Will she throw caution to the wind and give it a shot?

The past couldn’t change his present. The dryads remained unforgiving and he was out of time. Voices echoed across the snow and he pulled out his spyglass to scan the snowy valley behind him. Riders and dogs forged through the drifts, heading his way.

No hope for it. He’d have to brave the forest. Quinn cursed under his breath and picked his way into the undergrowth. The bushes within held no snow, but slowed his passage. He resisted the urge to climb. If he wanted any friendliness from the dryads he had to respect their homes. He pushed his way deeper among the trees and pulled off his bow as he searched for a good place to hide and wait.

Settling behind some thick rhododendrons, he pushed his white hood off and grimaced at the cold biting his ears. He notched an arrow and held it loosely as he scanned the tree line. Black trunks and shrubs obscured most of his view, but sound carried well as his trackers approached.

“Cripes, it’s the feckin’ dryad forest, it is. I ain’t goin’ in there!” The rough voice barely made it over the yelps and barks of the hounds.

“Don’t be such a ninny, Garlic. You know he went in there and he killed the Cap’n. He couldn’t have made it far. Go on, now.” Quinn recognized the captain’s second-in-command.

“No one comes outta there alive, y’hear? I ain’t goin’ in.” Garlic stood his ground.

The Second sighed. “Then send in the hounds. That’s what they’re for, right?”

But the dogs only milled around in the snow and whined, picking up the fear of their handler. Quinn’s neck prickled with the dryads’ magic, but he held his silence and waited.

“Oh for fuck’s sake!” A whip cracked and the hounds yelped, but none entered the trees. “Fine. I’ll show you cowards how it’s done.”

The Second spurred his horse toward the break in the undergrowth, but the animal reared and squealed in protest. He cursed and yanked the reins, forcing his mount between the trunks. When the understory proved too thick to pass, he hacked at it with his sword, scoring the bark and bushes with his blade.

Whispers and a subsonic rumbling spread through the woods, raising the hair on the back of Quinn’s neck. A breeze rattled the bare branches, but he saw no other movement beyond the man slashing his way into the forest. Quinn held his bow in a tight grip and breathed shallowly to keep the white plumes steaming from his nose small.

Suddenly the horse screamed as vines wrapped around its legs with thorns large enough to see from a distance. The animal struggled, jerking and lurching regardless of the man’s grip on its mouth. Bloody foam sprinkled the trunks and bushes around it and the man shouted in frustration and fear.

The horse broke free and reared again, tossing the man from its back before plunging out of the forest toward its herdmates. The Second hit the ground with a grunt and slowly turned over. He muttered balefully and pushed up, only to be pinned to the ground with two great spears. He shrieked as he writhed around the one through his gut, but the second in his shoulder held him still.

“Akers?” The men outside sounded scared.

“I told yous.” Garlic pulled the hounds back from the trees. “I told yous no one goes in that comes out.”

Akers’s cries settled down to whimpers and he tried to reach for his sword, but the thorny vines curled around the hilt and dragged the blade into the underbrush. Tall men appeared in the forest as if pine boughs had learned to walk. Intricate tattoos covered the exposed portions of their skin, giving the appearance of fine-grained wood. Only three stood around the pegged man, but Quinn suspected the trees hid others.

“Men are not welcome here, human. The message has been made clear.”

“You hacked at our trees, scarred them, broke our brother shrubs’ branches.” The dryad’s voice remained implacable. “For that there is a price.”

Akers struggled again, but the spears held him fast. “We were chasing an assassin who killed our friend. I had to get through. He came in first…”

“But he did no damage and he will be dealt with.”

Quinn’s gut sank, but he held still. No need to draw attention to himself quite yet.

The lead dryad stared for a long time then nodded. “Very well, I shall grant you relief.”

“Thank you.” Akers relaxed just before a vine snaked around his throat. He inhaled to protest, but the vine tightened and he squeaked his panic.

“I relieve you of your ignorant life and you may take your lack of respect with you. Begone.” The dryad turned away as the vine choked Akers into silence, his body kicking and shaking. An eerie crunch filled the forest followed by a wet tearing and the head rolled free of the twitching body.

“Take the body and bury it. It shall offer nourishment for the saplings.” The dryad leader nudged the head with his boot toe. “Toss this out to his compatriots to renew the warnings.”

Two dryads grasped the body and tore it from its spear moorings before dragging it away. A third grasped the head and hurled it out of the trees to land among the men and dogs still waiting to see if Akers would return.

Panic ensued and they scrambled away from the forest back the way they’d come.

Quinn had seen his fair share of death—had dealt most of it—but beheading by vine topped his list of things to avoid at the moment. He remained crouched, weighing his options of escape. While they hadn’t attacked him outright, he suspected the dryads knew where he hid. Quinn returned the arrow to his quiver and hung his bow across his chest. While he could probably take down several of them, he stood on their home turf and they could easily call in reinforcements.

No hope for it. He’d have to beg forgiveness and asylum. He tugged the hood back onto his head and stood. No point in hiding. They knew where he was. He latched the restraints on his visible knives and hatchet, and crossed his arms over his chest as he waited.

Quinn heard them before they appeared, but the space between sound and arrival couldn’t be measured. Faced with the same dryad leader as Akers, Quinn raised his hands from his chest, opening his fingers wide.

“I seek asylum with the dryads of the Arborium and wish to speak with the Keeper of the Grove.”