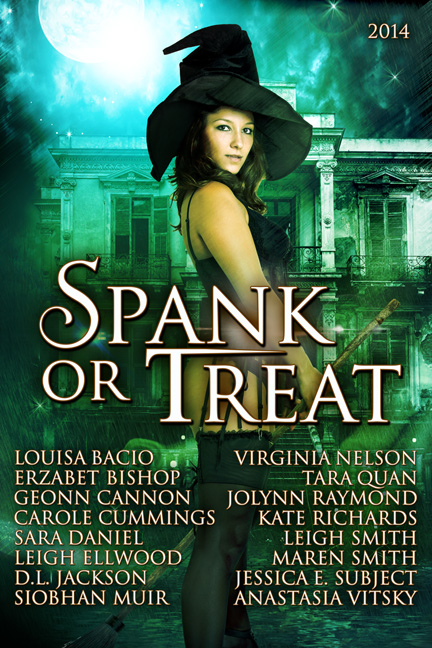 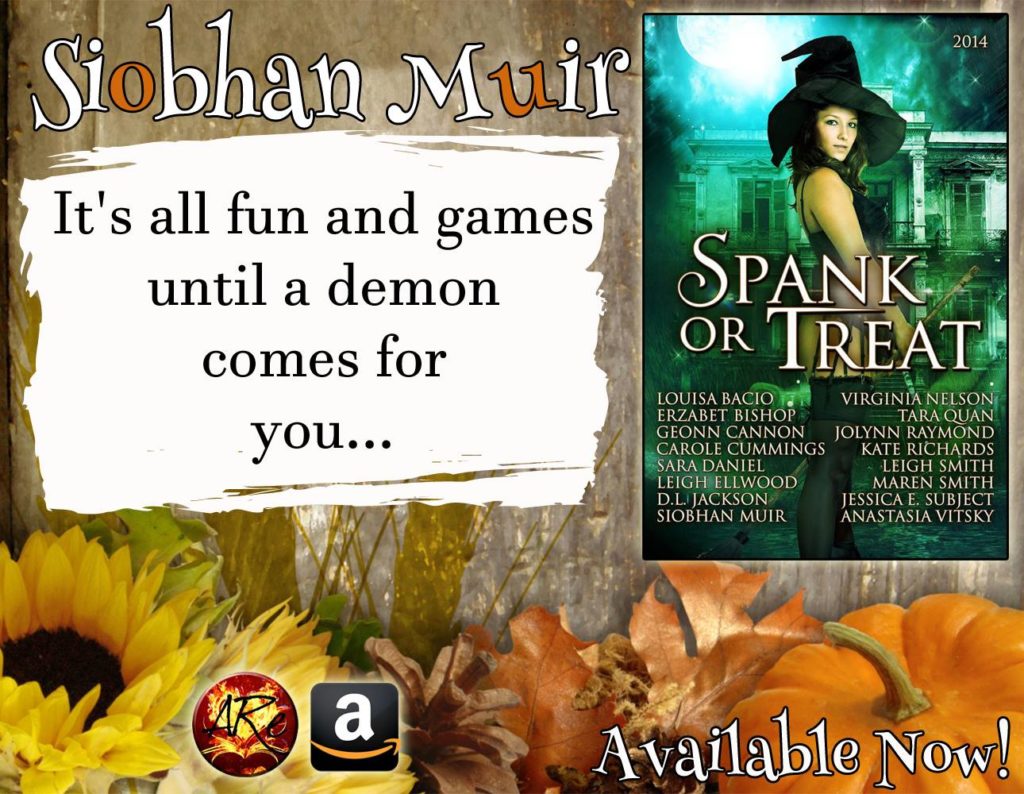 From sweet witch stories to passionate nights with a demon, the SPANK OR TREAT 2014 ANTHOLOGY offers sixteen sexy spanking stories with a paranormal twist. Inside you’ll find magical cookies, a phoenix in trouble, a husband’s special gift to his wife, and even a snowball fight with a mage. The romantic pairings range: M/F to F/F and M/M. Whether you prefer a paddle, a bare hand, or even a whip, you’re sure to find your pleasure.

After Ana by Anastasia Vitsky

Sometimes, a Domme must submit in order to heal wounds and find the love she needs.

“What’s the one rule when you get lost?” Shawna casts a spell in the forest to find her true love. When the results are not what she expects, she gets into a fight with her best friend Dru. Before her wish comes true, Shawna will have to learn a hard, yet pleasurable, lesson.

Charity Benshaw needs an assistant for her Enchanted Paddle Emporium. When Mercy applies for the job, sparks between these two witches start to fly.

The Special Ingredient by Geonn Cannon

Winnie Cabot always adds a special something to her Harvest Cookies, but this time one of her customers has a twist that will take the cake – or the cookie?

Angry bees and shagging squirrels and soot and more soot and wells gone dry…. Lucas is having a really bad day, and can’t decide if playing Damsel to Alex’s White Knight is a relief or just making everything worse. But when even the house is out to get you, maybe it’s time to embrace the pointy hat.

The Spanking Connection by Sara Daniel

Getting back to nature has a whole new meaning when Jonah helps Maddie connect with her magical heritage.

It’s best to pay for your purchases, or is it? Rik finds out the hard way.

Bear to Her by D.L. Jackson

How quickly the hunter can become the hunted. When Delaura sets out to kill an evil monster, she finds a bewitching woman instead.

Under Her Spell by Siobhan Muir

As a warrior, Phinn Winterbourne believes he’s a true hero until he meets witch Kendra MacGillivray, who isn’t interested in being saved. But it’s all fun and games until a demon comes after him, and they both fall Under Her Spell.

The Elder Warlock by Virginia Nelson

The Elder Warlock searches for power to feed his starving body once a year at harvest time. But when Pepper and Jadon meet, will their play leave her empty of magic and punished for her carnal needs…or leave them both wanting more?

A naughty frost witch challenges an earth mage to a snowball fight. One of them gets spanked. Find out who!

Carnival of the Damned by Jolynn Raymond

It was a dark and stormy night when Loiza snuck out to visit the Carnival of The Damned. Rips in time, a sudden storm, and star crossed lovers. What does fate have in store for two lovers trying to defeat evil?

Missy Sue and Kevin have come a long way since her first spanking last Halloween. They’re exploring their kinky side and are spending this Halloween with a new friend—one not afraid to join in the fun.

Once Upon A Witch by Leigh Smith

Mistress Mine by Maren Smith

Being submissive to a professional Mistress, Ana is well accustomed to following Miranda’s lead. But when Miranda takes Ana down into the Castle Dungeon on Halloween night, there ‘the ties that bind’ take on a whole new meaning…

Can a witch gain the trust of her phoenix lover? Will their flames of passion burn up the sheets or everything they own?

Phinnius Winterbourne tried to throttle the overwhelming envy curling through him as he watched his elder brother Darius from the trees across the creek. Darius roared at his adoptive daughters, chasing them in the grassy clearing behind the millhouse, and Phinnius wished he could be the one running.

I am running. The only thing wrong came from what chased him. Nothing so fun or easy as my elder brother.

Phinnius wanted to see his brother and gather his wisdom for the trouble he faced, but Phinn realized he’d only endanger Darius’s family. The last thing he wanted was to have children threatened by a morgira, a powerful tracker demon kept by the Winter Court to find wayward members.

Even if I’m not technically a member of the Winter Court.

The Winter Queen didn’t see it that way, not with their father’s blood running through their veins. Thanks, Father. Apparently, the association hadn’t ended with the senior Winterbourne’s death, and now Phinn had brought the demon to his brother’s door.

My intellectual prowess is a marvel.

Darius’s joy made Phinn’s heart ache, but he turned to retreat from his brother’s happiness—and ran straight into the most silent woman he’d ever met.

Phinn managed to catch her before she fell to the ground in an ungainly mess, but a frisson of awareness shot through him the moment he touched her. The scents of pumpkin spice and sun-baked leaves suffused his nose as he met a pair of eyes as blue as his own. An immediate sense of home and belonging filled his heart with yearning, and it broke free in a moan.

“Are you all right?”

A melodious contralto voice flowed over him and washed away some of his tension as if it had never been. Wait, I nearly knocked her over, and she’s asking me if I’m all right?

“Of course, mistress. Forgive me for nearly knocking you down.” He took a step back before he released her, curiously reluctant to let go. “I didn’t hurt you, did I?”

“Nope. It’s my fault for sneaking up on you.” She tilted her head swathed in a plush hood. A tendril of hair the color of golden wheat floated in the mild breeze. “Who are you and what are you doing hiding in the woods?”

Phinnius raised his eyebrows at her direct boldness, but she met his gaze frankly and waited him out.

“Nice to meet you, Mr. Winterbourne. If Darius is your brother, why are you skulking in the woods?” The woman raised an eyebrow of her own.

I do believe I’ve lost my touch. “I decided that perhaps my presence would be a hardship. And who might you be?”

“I’m a friend of Sabrina Winterbourne.” She raised her chin and gave him a tight smile.

“None of your business. If you’re just passing through, get along, lil doggy. Time’s a’wastin’ and Samhain’s approachin’.” She waved her hands at him as if to shoo him off. “Off you go, now.”

Phinn gaped at her. Was he really being dismissed by a woman no taller than his chin? He tried to regroup. “Tell me your name first, mistress.”